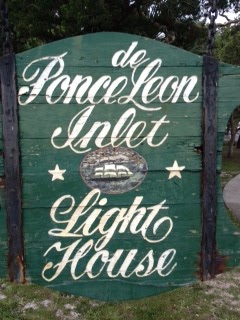 It’s getting cold outside here in Ohio. In order to revisit someplace warm I thought I’d take you on a short journey. I spent two weeks vacationing 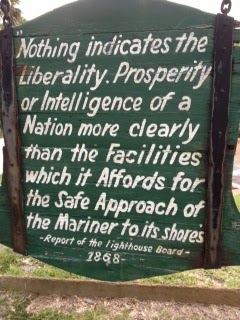 and visiting my husband’s family in Daytona Beach Shores this past June. And although this post has nothing to do with the Regency time period I’ve written my last three novels in I find lighthouses and the sea fascinating and wanted to be certain to visit this lighthouse while I was in the area. I am a native born Floridian. I came into the world in 1955 in Coral Gables, Florida. Although my family spent only a short time there it is my birthplace, so when I visit Florida I like to learn as much as I can first hand about this state. The lighthouse experience was one of my favorite aspects of this vacation.

The lighthouse is 175 feet high and it’s Florida’s tallest lighthouse. My family and I climbed every step of the steep spiral staircase. That’s 203 steps! It was exhausting and exhilarating. I’m not one that enjoys heights but I have to admit that I loved the spectacular view at the top and the breeze. I think it hit 91 degrees that day. 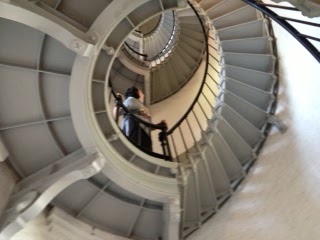 said we’d regret it forever if we didn’t go up and so we did. Both my husband and I were grateful for the landings along the way where we could take a breather.. It’s not possible to pass others on the staircase because it’s so narrow. If someone is coming down you wait on the landing until they pass.

The lighthouse was erected in 1835 when the area was known as Mosquito Inlet. Don’t you love it! I think I’ve got a novel brewing. 🙂 Anyway, I digress. Although the lighthouse was built in 1835, storms and an Indian attack crumbled the building. It wasn’t until 1887 that it became a functional lighthouse.

Correction from Ellen on Dec. 2, 2013: “thank you for the nice comments about the Ponce de Leon Inlet Lighthouse. I would just like to make a small correction in your description of our history. The current lighthouse was completed in 1887 and stands on the north shore of Ponce Inlet. Formerly known as Mosquito Inlet, an earlier lighthouse was built on the Inlet’s south shore in 1835. This lighthouse was never lit and crumbled into the sea in 1836. The 1887 Mosquito (now Ponce) Inlet Lighthouse was not the same lighthouse, not the same location, and not a continuation of the earlier lighthouse, and has virtually nothing in common with the 1887 structure which is still active today. Thanks!”

Many thanks to Ellen for catching my error. I’m grateful that she did catch it. This is why when writing a novel you have to check and double check resources and information.

You’ll be thrilled to know that even though you may be far from Florida at this moment you can take a virtual tour HERE! Enjoy! 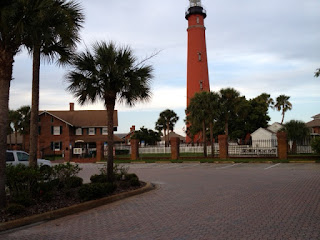 There is a wonderful museum on the grounds that you’ll see if you take the virtual tour. It was awesome! We bought our t-shirts and of course I had to pick up a book titled, Tales of Ponce Inlet by Ayres Davies.

“In 1897, author and journalist Stephen Crane was en route to cover a brewing revolt against Spanish rule in Cuba, when the ship he was on, the SS Commodore, sank off the coast of Florida. Crane escaped in a small dinghy with several crewmen, and they eventually sighted and steered for the Mosquito Inlet Light. Crane used this experience in his short story “The Open Boat”.” You can read more HERE!

Jillian Kent explores the darker side of Regency England. Her latest novel,

Mystery of the Heart, released in January 2013. Her first novel, Secrets of the Heart will introduce you to asylum life, and Chameleon will take you into historic Bedlam itself. But never fear, romance is alive and well in all of Jillian’s novels.

Chameleon, finaled in the Selah Awards at Blue Ridge Mountains Christian Writers Conference and also in the Daphne du Maurier Awards through Romance Writers of Americas Mystery and Suspense Chapter.

Jillian blogs on the 29th of each month at the Christian Fiction Historical Society.